Today’s post comes from Yvonne Johnson, National PTA’s 2014 Advocacy Ambassador and DE PTA’s Federal Legislative Chair. Ms. Johnson has many years of child advocacy experience with the Delaware PTA, and is a passionate advocate for education issues. In her piece, she shares a recent advocacy win and the strategy used to obtain it. Passion, patience and determination are key to creating positive change for every child. For resources on becoming a better advocate, visit pta.org/advocacy. 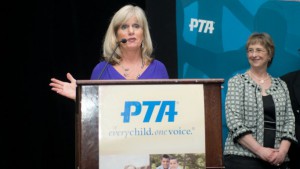 When I think of advocacy, it is like second nature for me. Of course, it was not always like that. The first time I set my mind to change something I had no idea how to begin. But, the most important ingredient in advocacy is a passion to change something. That is something we all have in common as PTA members: a desire to make a difference or to change the status quo.

A great example of this comes from recent efforts in Delaware. Last year, there was a proposal from the administration of my local district to create inclusion in all our schools. I live in the largest school district in Delaware. Our district is highly in demand, as it offers many choices for families: magnets, charters, specialized programs, and traditional settings. We also have the only public school in the state that offers a K to 8 model. The district administration decided, without consulting families, that they would force all students that require special education services to go to their feeder school, and the special schools and programs many students had been attending would be eliminated. PTA of course supports inclusion with the right supports and resources in place. However, the district was pushing to eliminate any program that would be stand alone. For example, our English Language Learner (ELL) population attends schools only with ELL programs. The district proposed that these students be sent to a mainstream setting without providing them a dual language program or any other supports in order for them to learn. Additionally, the district proposed that students with highly specialized needs be mainstreamed without additional nurses or paraprofessionals in the school, or other such supports as necessary.

Many of these families were quite upset, claiming that their children had already tried the mainstream or inclusion setting, but did not fare well. These parents wanted the option to keep their children in special programs if that was their choice. In Delaware choice is used by a majority of families, and the district was essentially taking this away from families! PTA argued that the district was taking away the parent’s right to choose the best fit for their student, based on what their IEP dictated and the student needed.

The school board was making the decision. After polling them it appeared the vote would be 6 yes and 1 no to move to this inclusion plan. So PTA got to work. We forced the district to have numerous public sessions to gain comment and concern from the community and parents. Each parent met individually with board members, and PTA met with the administration, to share their concerns about the plan, which was more like a timeline for implementation. We garnered support from our local legislators and educated them on the subject, and made certain that their constituents emailed, called and wrote to them about their opposition to the plan. The icing on the cake was when we discovered that the district was planning to ask for a tax hike (referendum) to sustain programs in the schools the following year. PTA simply told district leaders that it would be very tough to gain support from parents, teachers or the community if they could not support families in this inclusion situation.

After hours of work, meetings, research, op-eds in the newspaper, bloggers, social media postings, numerous public meetings (and a lot of coffee!), the vote was scheduled for the March School Board meeting. Hundreds of PTA members, dressed in a Red Shirt, attended the meeting. We each went to the microphone and just said “VOTE NO!” After 2 and half hours of this, there were four proposals. The first one, 6 NOs and 1 YES! The other three did not even get a second to the motion. We did it! We were successful in showing the school board that the plan was inadequate and inappropriate. We were effective in showing the school board that we want families included in the planning and discussions of their children’s schools. We were victorious in making a statement about never underestimating the power of a parent’s voice!

Up next are numerous committees to gain public input on the plan forward. There has been a link added to our local school district’s website. Everyone who offered comment received a letter from the superintendent inviting them to participate in these collaborative committees to ascertain that the plan that is put forth is the right one for all students! Working together, PTA was able to make a different for the students in this district.

Today is the day for school board elections across the state. Make sure you get out and vote! Polls are open until 8 p.m. You do not need to be registerd to vote or be a homeowner to vote. You just need to have a legal ID with a calod address withine an election. Find polling locations and more at the link below. Election info: elections.delaware.gov/information/elections/school.shtmlDistricts with board elections:New Castle County School Districts- Appoquinimink- Brandywine- Christina- Colonial- Red Clay Consolidated- SmyrnaKent County School Districts- Caesar Rodney- Capital- Lake Forest- Milford- Smyrna- WoodbridgeSussex County School Districts- Cape Henlopen- Delmar- Indian River- Laurel- Milford- Seaford- Woodbridge ... See MoreSee Less

Timeline photosDid you know? You can use other National PTA programs—such as STEM + Families, Reflections, PTA Connected and more—to earn your School of Excellence designation. Learn more at PTA.org/Excellence #PTAExcellence ... See MoreSee Less

When this happens, it's usually because the owner only shared it with a small group of people, changed who can see it or it's been deleted.
View on Facebook
· Share