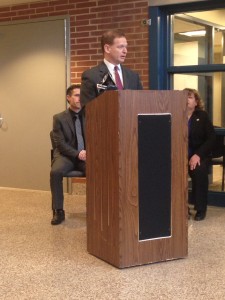 In May of 2012, Delaware PTA drafted a letter to the Lt. Governor, AG office, House and Senate Reps as well as several community stakeholders praising the work of the Lt. Governor and Attorney General’s office as well as the sponsors of SB 193 and HB 268. We felt strongly that involving parents and parent groups as part of the collaborative process would help strengthen the bill. We have had many discussions with the Lt. Governor and the Attorney General’s office about various components of school safety. So, we were pleased to see these groups develop and introduce important components to improve bullying prevention legislation.

Mark Holodick spoke about the work being done in his district including having 5 Elementary Schools that are being specially trained in anti-bullying which do include parent workshops. The Middle Schools have a “Challenge Day” while also making sure that there is always a place for kids to turn to when they are need. Even if they are not personally the victim, they also have an anti-bully bin in which students may write a little note to speak out while remaining anonymous.

Lt. Governor Matt Denn referred to bullying as a “significant public health problem.” 15 out of 19 school districts have adopted this new cyber bully policies but very few charter schools have implemented it (less than half.) Only 50% of the problems are being reported to parents on both sides.

Bullying seems to be mostly based on appearances when they took a small poll. Shockingly the next highest percentage of reasons kids were bullied was based on disabilities. They fear this number is actually higher but part of those numbers were lumped into the “appearance” category. It’s hard enough as it is for these children in their day to day lives but to be even more singled out for something that’s already a hindrance that no one else has to deal with is just terrible. Lastly, 8% children are made fun of for gender identity.

Deputy Attorney General, Patty Lewis spoke mainly and directly to the students that were present making sure that they understand the severity of the situation and reminding him that no matter how much we speak to them, ultimately, it’s their choice to do the right thing and make sure that bullying doesn’t occur.

The 2 students that spoke were Barry Mcguinness and Keena Saunders. They let everyone know about the positive changes that the students are making in order to help others, reach out and get rid of bullying.  Arista believes the school’s initiatives are making a difference, “from posters, special days, the bully bin, door wreaths and multiple other things the kids at Springer Middle School, I believe, understand and are truly striving to make a difference within their peers. They are a great example to other schools to follow”. 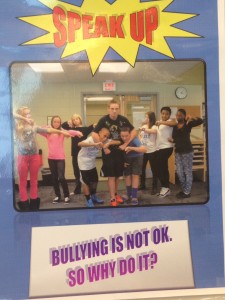 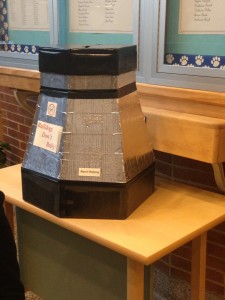 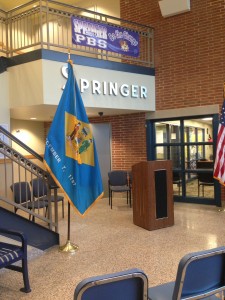 Today is the day for school board elections across the state. Make sure you get out and vote! Polls are open until 8 p.m. You do not need to be registerd to vote or be a homeowner to vote. You just need to have a legal ID with a calod address withine an election. Find polling locations and more at the link below. Election info: elections.delaware.gov/information/elections/school.shtmlDistricts with board elections:New Castle County School Districts- Appoquinimink- Brandywine- Christina- Colonial- Red Clay Consolidated- SmyrnaKent County School Districts- Caesar Rodney- Capital- Lake Forest- Milford- Smyrna- WoodbridgeSussex County School Districts- Cape Henlopen- Delmar- Indian River- Laurel- Milford- Seaford- Woodbridge ... See MoreSee Less

Timeline photosDid you know? You can use other National PTA programs—such as STEM + Families, Reflections, PTA Connected and more—to earn your School of Excellence designation. Learn more at PTA.org/Excellence #PTAExcellence ... See MoreSee Less

When this happens, it's usually because the owner only shared it with a small group of people, changed who can see it or it's been deleted.
View on Facebook
· Share